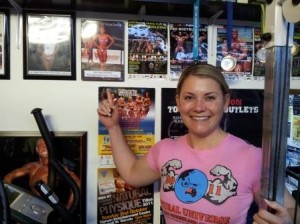 Erica arrived for her last training session of 2011 to find that she had made the Flexr6 wall of fame. Erica had a great year competing and is taking the first of many steps in 2012 to become a doctor. Flexr6 wishes Erica all the best in her pursuit of those two impressive letters MD. Erica is also bringing an impressive physique to the stage for the 2012 INBA Riverina show to be held in Wagga Wagga on April 22.